Sunday 11th November 2018: a date with real significance. Not only did Armistice Day fall on a Sunday this year, but it coincided with the centenary of the formal ending of World War 1. Because of this, a special service was organised for the Memorial Hall, the establishment of which was to remember all those local people who fell in battle on our behalf.

After the morning service at the Church of the Holy Jesus, the congregation filed out onto Church Road, where they were joined by many other people from the village. The Lydbrook Silver Band led the march down the hill and through the village to the hall, where all assembled in the narrow space permitted by the road. Made safe by the Parish Council, through Bruce Hogan who had arranged with the local police to have the road closed during the service. 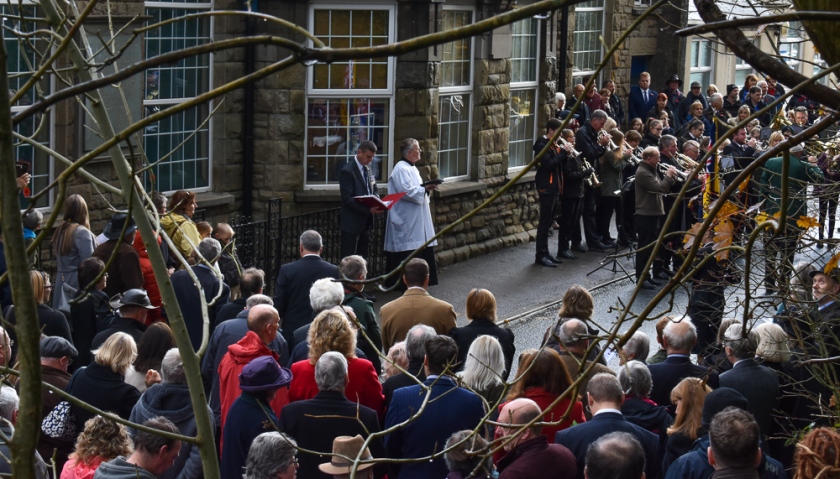 The Rev. Roger Minson led the religious aspect of the service with hymns and prayers.
Trevor Hek hosted the ceremony on behalf of the Royal British Legion, ensuring all went according to plan. He read out the names of those commemorated, giving details about their service. And, as the names were read, the staff and pupils of Lydbrook Primary School placed poppy crosses at the memorial, and wreaths were laid.
The Royal British Legion Standard was in the capable hands of Standard-bearer Tammie Johnstone.

The Last Post was played, evoking that usual lump-in-the-throat response by many, by Robert Morgan, M.B.E., who also led and conducted the Lydbrook Silver Band, playing appropriate music and accompanying the hymns.

Rachael Mowatt, of the Women’s Institute, read John McCrae’s ‘In Flanders Fields’, evoking more memories and thoughts of the devastating effects of war.
The gathered crowd of attendees did the village proud; a good throng, representing all ages. Even one or two villagers in poor health managed to attend and all braved the sudden downpours without complaint. And, at least the sun emerged afterwards.

The sincere thanks of the Committee of Lydbrook Memorial Hall and Recreation Ground go to all who participated in, organised, and attended this centenary commemoration of the sacrifice of our brave local heroes.

Sorry to be late with this – I was collecting information. My photographs are a little limited, as I climbed the path opposite the hall to get an overall shot and was then trapped there for the duration. If anyone has additional pictures they’d be willing to share here, please use the ‘Contact’ tab to get in touch, and we can make arrangements. Thank you.

2 thoughts on “Armistice Day at the Memorial Hall”

This site uses Akismet to reduce spam. Learn how your comment data is processed.